Sweet Success on their Own Terms: Meet Annabelle Topacio and Ian Flores of Mr. & Mrs. Miscellaneous

There's the usual crowd of locals and the out-of-the-area faithful making the pilgrimage to taste the incredible ice cream offerings such as buttermilk lemon, candied violet or birthday cake.  And the sweets such as peanut butter malt balls or dark chocolate cookies with Bing cherries call to the faithful as well.

But it's the way pastry chefs Annabelle Topacio and Ian Flores have decided to run their business that sets it apart from the rest of the frantic foodie crush.

Closed on Monday? Not open at night?  And wait, they closed because they ran out of ice cream? Why can't I find their website or twitter feed?

That's no way to build an empire now is it?

Building an empire though is definitely not on the to do list for the professionally trained pastry chefs.

Their training and their years of working at such high caliber restaurants in Northern and Southern California such as Postrio and Spago have made these partners in both business and life confident of their pastry skills and aware of their natural talent for the job.

As such, they seem to have nothing to prove to anyone.   They have set out to pair their obsessiveness for quality and commitment for control over their finished product with the desire for a more laid back lifestyle. At least, as laid back as you can get when you are running your own business.

While employee Ben Vazakas worked the counter, we spoke with the chefs during a brief break from their baking and churning to get the scoop on their two-year old business.

It really was a life style decision.  We both love the physical aspect of cooking and baking and the creative challenge of developing recipes.  But we had both worked at enough high profile restaurants to know what success can bring.

Even though we were employees, we were working a lot of hours and traveling quite a bit.

But then we found ourselves with time on our hands when the restaurant Ian was working for closed and Annabelle was on family leave from her job before the birth of our child.

We decided to try our hands at opening a sweet shop and believe it or not, thought a small shop selling primarily ice cream and a very curated selection of sweets would not be as crazy a business to run as a bakery.

We certainly didn't anticipate how successful we would be! At first customers were disappointed that we changed the ice cream offerings so much, but now they expect it and trust us to offer some quirky ice cream pairings along with the more traditional flavors.

In a way our shop is really like a restaurant in that we bake with the seasons and because  our menu changes so often.  And it is like a full service bakery in that we make all the items that go into or on top of the ice cream or become products on their own like our cookies, caramels and malt balls.

When the shop is open we are both almost always here and that's where we want to be.  But we also want to have time for a personal life.  That's why we aren't open all the time and close when we run out of product.

We are asked all the time if we want to bring our hot fudge sauce to market or to resell our sweets such as the peanut butter malt balls or the peanut brittle and brown sugar cookies but that isn't something we want to focus on right now.  We aren't driven by making piles of money but more by the creative challenge of dreaming up new recipes as well as figuring out how to run a small business.

When we first came to San Francisco in 2008 we had different ideas on where we wanted to live.  Marin was one choice as was downtown SF.  Dogpatch is a bit like both in that it is residential as well as very urban.  It is a different type of city living.

We like that it has a real neighborhood feel to it.  And in 2008 it was one of the more affordable neighborhoods in SF!

We had lunch at Kitchenette one day and started talking to neighbors about this building that we are in now.  It was a long closed former sandwich shop and was twice as big as it is now.  It also had no electricity or plumbing.  We had no plan at that time to open a shop but we talked to the landlord several times and decided to go for it.  It all worked out and we opened in May 2010.

So we live and work in Dogpatch.  We really don't know where we would go if we were forced to leave -- we like it that much! 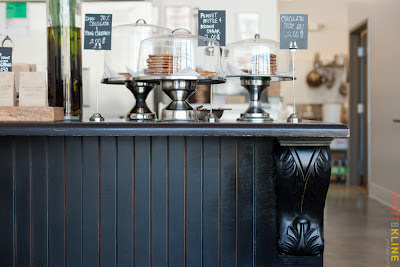 We have met so many!  Michael Recchiuti of Recchiuti Chocolates also has a business in this building and is like having a cool uncle around.  He is always willing to offer advice or to help out.

Our landlord, Greg Markoulis has been in Dogpatch forever and his family owns the American Industrial Building where our shop is located.  He has a lot of stories about this area and is always willing to offer business advice to us.

And Shy at Reno's Liquor Shop is a neighborhood fixture and is always in a good mood!

The original chocolate man of San Francisco, Joseph Schmidt, used to operate out of this building and he still drops in to see us and he brings flowers!  He enjoys visiting all the various large and small businesses and their owners in this building.  We see him about twice a month.  He is such a riot with lots of stories to tell.  The man spouts out quips as well as advice in every sentence!

What would you be doing if you weren't making ice cream and preheating the ovens?

We are doing what we love.  If would be fun to offer some classes or to host dessert only parties but this is enough for us right now.

And that name is not easy to say -- how did you pick Mr. & Mrs. Miscellaneous for your shop?

We wanted people to know that there was both a Mr. and a Mrs. involved in the business.  And also that customers get whatever we have that day -- a lot of miscellaneous elements -- and trust that the flavors will work out! 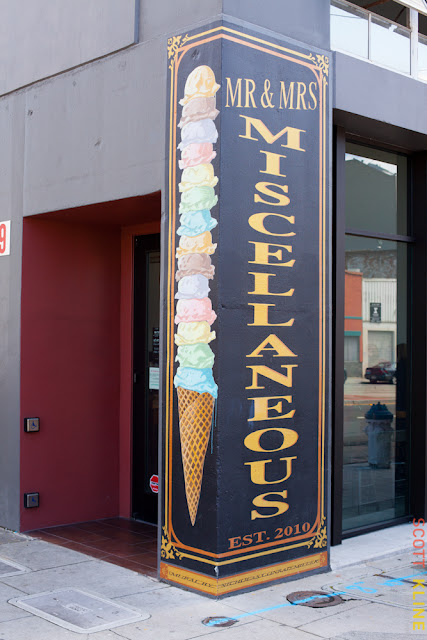 Posted by Patricia Kline at 8:36 AM