The room appears in total darkness as we enter Hogan's Goat Tavern.  As our eyes adjust we see the dapper figure of owner Christopher Webster.  The coolness of the room is a welcome relief from the heat and bright sunshine of the June morning.  Now all we need is a cool drink to quench our thirst.

And there is plenty of liquid to choose from here.  Webster stocks the usual suspects of high-end spirits and beers but he also offers local spirit, beer and wine brands such as wine from SLO Down Wines, vermouth from Sutton Cellars and Anchor Steam beer from Anchor Brewing.  But if your taste is more Budweiser than Anchor Steam, he has that as well.

We take a seat at the glossy mahogany bar and decide to try one of the beers on tap.  The taps may produce beer that has been created as an artistic expression of the brewmaster but the taps themselves appear as small pieces of art.  One of the taps from producer Orange & Black is even signed by the brewmaster.  It being a Giants Game Day, we order the Orange & Black as well as one red wine. 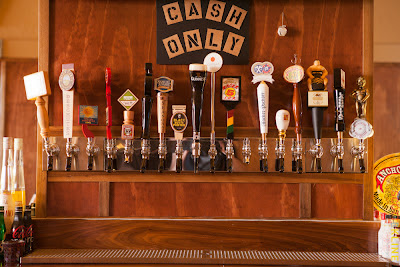 Webster appears to favor order and symmetry not only in his attire, but also in how his bar looks and how he serves his product.  Each beer is served in a glass from the producer of the beer.  Webster explains that he feels it is important to serve the beer how the head brewer envisioned it to be served.  Except for the three flat screen TVs on mute and the pool table in the back of the room, the bar is sparse on furnishings.  This leaves the focus on the spirits being consumed and if you desire, conversation with your fellow imbibers.

The overall feel however is one of peace and quiet -- a good place to have a drink in peace.

As Webster pulled our beer and slid it down the bar to us old style with a flick of his wrist and not a drop spilled, he agreed to swap roles and be the talker instead of the stereotypical listener the role that seems to befall most bartenders.

It's fun!  I have had a lot of serious jobs in the past and I still work as an investigator for insurance companies.  In that work I primarily gather facts about people and what they did or did not do.

As a break from the investigator business I started bartending on the weekends at The Double Play Sports Bar.  Long time bartender Jimmy Calonico took me on as an apprentice and taught me a lot.  Eventually I decided I needed to get an official certification in bartending.  From there I moved to the Dogpatch Saloon and finally to buying and completely renovating the Sea Star Club in 2011 which became Hogan's Goat Tavern.

This job is the opposite of my investigator work.  Here I don't have to pry any thing out of people -- if customers want to tell me things about them that's fine.  Or they can just be left alone and that is fine with me as well. 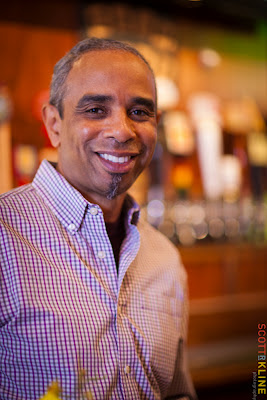 The best way to get a coveted liquor license in San Francisco is to buy from a business that already has the license.  When the Sea Star became available I was interested in it because of its existing liquor license.   I also already knew many potential customers here from my bartending work at The Double Play and the Dogpatch Saloon.

I also liked how Dogpatch is so easily accessible to people coming from the Peninsula or from other parts of San Francisco.

Julia and Gilberth Cab are the owners of three Dogpatch restaurants and probably the hardest workers I know.  I think they actually work EIGHT days a week.

What is an interesting Dogpatch story that has happened to you in Dogpatch?

It's not a story that has actually happened to me but one of my customers is the librarian at San Quentin prison.  He has some very amazing stories about what it is like to work there.

What would you be doing if you weren't pouring drinks and letting customers bend your ear?

I love this work -- this is what I want to be doing every day.

And finally, why did you name the bar Hogan's Goat Tavern?

It is an old expression and the favorite saying of the father of my partner.  You can find several different meanings of the expression but the one he used all the time was, "you are as f***ed up as a Hogan's Goat.  We thought it would be a fitting name for a bar.

Posted by Patricia Kline at 8:38 AM