When we ask our indogpatch subjects to name another interesting Dogpatch person, there are two or three names that come up over and over again.  Susan Eslick is on that short list.

So of course we had to meet this Dogpatch dynamo for ourselves.

We met Eslick at her studio in the Noonan Building on Pier 70 in Dogpatch -- a haven for painters, photographers and other artists -- and she soon had us alternatively laughing at her stories and shaking our heads in disbelief at all she has accomplished as a neighborhood activist.

Eslick has lived in San Francisco for more than 30 years but grew up in Buffalo, New York and studied printmaking and ceramics at Rhode Island School of Design in Providence, Rhode Island.   She fell in love with San Francisco during an art program she attended at the Art Institute her Junior year and soon moved here after a completing a graduate program in printmaking at the School of the Art Institute of Chicago.

Her creative business includes being a design consultant and creative director for a variety of clients as well as producing her own line of ceramic tableware and designing stationery items such as notebooks, journals and calendars for various clients.

Her studio is bright and airy as you would expect an artist's studio to be but turns out it is also not where Eslick spends most of her time these days.

Eslick continues to have a thriving design business but has an equally successful business helping other artists and creative types implement financial systems for their businesses.

Implementing financial systems?  Not a business typically thought of for artsy types. 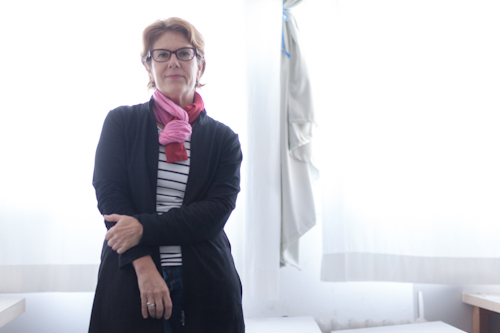 Why do you do what you do?
My tax accountant was always impressed at tax time when I would bring him accurate and complete financial statements for my design business.  He joked that if I wanted to help other artists get their financial act together that he had quite a few clients he could immediately send my way.

There is the stereotype of artists not being good with money but I was always determined to make a living by being an artist.  And being an entrepreneur runs in my family -- my sister is an interior designer in SF and another sister owns a restaurant in Chicago.

I guess you might say I was an artist in search of a business when I arrived in San Francisco.  A partner and I started a commercial and residential ceramic tile business and got our big break when we were hired to create the tile for the first Apple Computer headquarters back when Apple was just getting started.

I'm proud of the successful business I've built as an artist and designer but the design business has changed a lot in the last few years and I was ready for another challenge.  I'm still an active designer and always will be but now I'm reinventing myself as someone who can help others make a living by doing their art.

I went back to my tax accountant and said I was ready.  I named my business (The Bookkeeper), designed my new cards and I was instantly busy!  I've been in this new business for about two years and have more than 30 clients. It's all word-of-mouth -- I don't even have a website!

And I love it.  Many artists are self-employed and as such are alone most of the time.  I like to think I do more than just financial systems for my clients -- I'm also a good sounding board for new ideas since I can relate to their creative process.

But in the late 1990s the character of Dogpatch was threatened by one inappropriate building project after another.  I started the Dogpatch Neighborhood Association (DNA) to help protect the neighborhood from some of these projects such as the 300 bed homeless shelter that former Mayor Willie Brown wanted to put at 20th and Illinois.

Just as there are today, there were a lot of creative people in Dogpatch so we all rallied to put together impressive press packets and suddenly we were all activists!

We told the city that we would consider a 50 bed facility if every other neighborhood in SF would do the same.  Willie Brown backed down.

We then took on the immense project of having Dogpatch designated as an historic neighborhood by the SF Board of Supervisors.

Thanks to the work of SF architect Christopher VerPlanck and his interest in San Francisco's nineteenth-century industrial architecture and workers' housing, Dogpatch resident John Borg and I were able to create a convincing dog-and-pony show to educate the board about Dogpatch.

We argued that Dogpatch was one of the original Live/Work neighborhoods that were just then becoming all the rage in San Francisco as evidenced by the still standing Pelton Cottages -- inexpensive housing that was built to house waterfront workers.

One of the requirements to become an historic district is to have an official survey of the neighborhood completed. It took four years but we raised more than $15,000 to get the survey completed and in 2002 the Board of Supervisors voted in favor of the historic neighborhood designation.


Who is another fascinating person you have met in Dogpatch?
Dennis Herrera, the SF city attorney, has been in the neighborhood for a long, long time.  He has lots of stories about the "early" days and is a super approachable and nice guy.

Also, boat builder Paul Zingaro and the owner of Persnickety Painters, Jared Doumani have been in Dogpatch a long time and have great stories.

I guess I enjoy good storytellers!

What is an interesting story that has happened to you in Dogpatch?
It was about nine years ago and my mom was visiting from New York.  It was early in the morning and we were getting ready to take her to the airport.  Mom kept saying how she was hearing lots of noise outside.  We downplayed it since we live in an industrial neighborhood.  We even heard a big BOOM like an explosion but we even dismissed that.  Finally, someone starts to bang on our front door.  It's my sister and behind her is a crowd of drug enforcement agents in riot gear as well as lots of news media.

Turns out the police were conducting an early morning raid on the Hells Angels who have their headquarters on our street! The big boom was the door being blown off their headquarters.  Of course my mom no longer wanted to go to the airport with all the excitement going on outside our front door.

What would you be doing if you weren't doing this?
I'm doing what I want to do.  I feel very satisfied with my work and with my role as Dogpatch booster!

Posted by Patricia Kline at 5:57 PM