One of the many things we love about Dogpatch is the discoveries we find lurking behind the numerous nondescript warehouse doors that still dot the neighborhood.

One stifling hot October day we found ourselves dodging the Veritable Vegetable trucks at Tennessee and Cesar Chavez to locate a newcomer to Dogpatch -- Deal Décor.  We slipped in the door behind a young kid wearing both a San Francisco Giants hat and an Oakland Athletic jersey -- both teams had just won their divisions.

The building directory was evidence that this particular warehouse was home to dozens of small businesses, including LightSource, Rebel8 and Acme Novelty Company but we were pretty confident that this diplomatic kid must be heading to the San Francisco Baseball Academy.

Once inside we made our way to the offices of Deal Décor.  We were greeted by founders Craig Sakuma and Gregory Lok as well as by Billy, the resident office dog owned by a neighboring business.

The founders may have recently received $1.2 million in funding but their investors don't need to worry that it is being spent on posh office space -- their offices looked like someone had been bowling using furniture as the bowling pins -- sofas, chairs and other assorted furniture pieces were scattered throughout their office space.

Deal Décor is all about using group-buying power to offer consumers a 30-70% savings on furniture and other home goods.  The leverage of the group purchasing power allows them to cut out the expense of a middleman and ship directly to the buyer.  We wondered if perhaps the founders were fans of journalist, Thomas Friedman and his book, The World is Flat, because that is essentially at the heart of how they look at the world.  Deal Decor is using the Internet to flatten the traditional supply chain in buying furniture.  And a supply chain doesn't come much more old-school than a furniture one.

We took a few of those chairs to the less crowded and much cooler hallway to talk to Craig Sakuma about his new company. 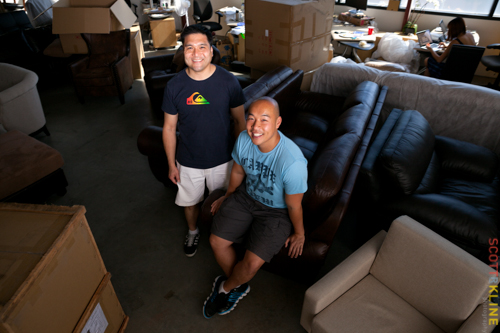 Both Greg and I worked for many years in the traditional home furnishings industry.  As such we know the inner workings of the industry.  We both worked a lot in Asia and have a lot of connections there.  We saw the inefficiencies and we also knew that even though the consumer thought they were getting a unique piece of furniture, one factory in China actually makes the furniture for lots of brands.  There was really no reason to be paying such a huge mark up for the furniture.  I guess we saw an opportunity to create a whole new category in the furniture industry -- similar to how Frank & Oak is shaking up the menswear industry and how Warby Parker is offering an alternative way to buy prescription eyewear.  We are all using the power of the Internet to flatten the supply chains for traditional consumer products, which in turn creates amazing deals for consumers.

Once we have enough orders of our featured product to fill an ocean container, we have our factory build the product then we ship it direct to the consumer.  We typically have three new pieces each week and each deal last ten days.  We tested out our idea in California first.  The enthusiastic consumer response convinced us we were ready to launch nation-wide, which we just did in September.  Before we launched we actually had one consumer who lived out of state who so wanted to buy our featured product that they figured out a way to circumvent our ordering system!  Of course we had to let them know we couldn't yet sell to them but we did let them know that we are now nation-wide!

Until we found this space we had been working out of my apartment.  But we now have five local employees as well as three based in China.  We also needed a large space so we could photograph our samples.  So it was time to start looking for a real office.

We actually found this place on Craigslist!  It has the industrial elevators and the high ceilings we need and the location is so convenient.

One of our neighbors here is Sam Hoffman.  He owns LightSource.  It is a large-scale digital printing studio. They do such beautiful work.  I'm so impressed with him and the work they do.

I was working here late one Sunday night and all of a sudden I hear music.  I go out in the hallway and there are party streamers everywhere and kids dancing.  It looked like a middle school dance!  Turns out the SF Baseball Academy were hosting a teenager's birthday party.  Not something you see everyday in an office building!

I would be looking for another start-up to run!  I grew up on the East Coast and have lived and worked all over the U.S. and internationally.  But San Francisco is unique in how friendly and supportive they are to entrepreneurs.  I love the collaborative culture here.

Posted by Patricia Kline at 8:42 AM