Blue no more: Cup of Blues Ready for Its Makeover 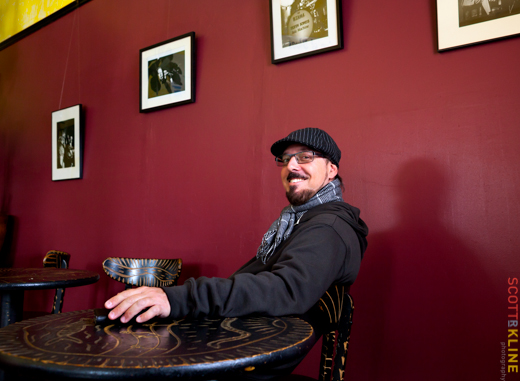 A common sight at the corner of 22nd and Minnesota is the figure of Joshua Shertz, dapper in his ever present cloth cap, pacing back and forth while talking on his cell phone or enjoying the sun with customers and friends at a table in front of his cafe, Cup of Blues.

We have often wondered why Cup of Blues serves only coffee and pastries and a few sandwich offerings and closes at 2 pm.  And as far as we could tell, there never seemed to be any blues played at all -- at least not the musical kind.  It seems like a perfect location for a bustling all day restaurant located as it is on the main merchant street of Dogpatch and within customer sharing distance of Chocolate Lab and Piccino Cafe.

Turns out Shertz and a new business partner have been planning and plotting for many months and they are almost ready to close Cup of Blues and transform the cafe into a restaurant offering something for everyone -- whether it be stopping by for a glass of wine or somewhere to go on date night.

A steady stream of customers ordered coffee and pastries the day we sat down to talk to Shertz about his plans for the cafe.

Why do you do what you do?
I love to entertain people and I love food and wine.  I started out my professional life in the music business.  I'm from New York City but moved to Los Angeles to pursue my music career although I briefly lived in San Francisco for a year before heading to L.A.  In L.A. I was a music producer and songwriter for about a decade.  I came back to SF when my dad was ill.

I decided to stay in SF -- I was pretty much done with the music business.  The business had changed from a live act business once MTV started -- I decided I needed a break.  The food/wine business is another form of entertainment. 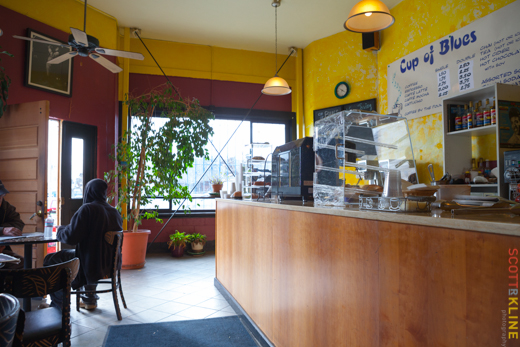 Why Dogpatch?
I wanted a cafe that initially would be a coffee cafe but could someday be a full service restaurant.  I actually signed a lease on a great spot in  Berkeley but when I went to complete the paperwork at City Hall, I was told the city was putting a moratorium on cafes!  I was lucky that I was able to get out of my lease.

A friend drove me around SF and we eventually discovered Dogpatch.  I had never heard of this neighborhood but I liked what I saw -- homeowners putting money into their homes by painting them or doing maintenance.  And I loved all the Victorian homes.  It seemed like a neighborhood on the rise -- and this was in 1994.  And of course I liked how sunny the neighborhood was!

This site was originally a grocery store for many decades but it was being used as a living space.  I signed a lease and fixed it up and we have been here ever since.  What I didn't know that due to some issues I had with a former business partner that it would take so long to realize my goal of having a full service restaurant.

We are working on a complete redesign of this space with an architect and designer.  I can't wait to get the bars off the windows and open this place up!  We have our beer and wine license and I'm in discussions with general managers and executive chefs.  I want an approachable all day menu that will have items for breakfast, brunch as well as happy hour and late night dining.

We will most likely close at the end of March for renovations and reopen in May.

And there while we may at some point have live music, it will not be Blues!

Who is another fascinating person you have met in Dogpatch?
There are quite a few musicians and film people who live and work in Dogpatch.  I've really enjoyed meeting filmmaker David Munro and his wife, the producer Xandra Castleton,  of Grotto Films.  They are both so creative and David has some great stories.

What is an interesting story that has happened to you in Dogpatch?
Well the first month I was in business a customer had a medical emergency in here.  I thought, "oh great, this is what it is going to be like to deal with the public!"

Over the years it has been fun to watch various production companies film in our neighborhood.  The TV show, Nash Bridges, starring Don Johnson used to film here all the time.

And the first year the Burning Man Decompression event was held on Indiana Street was just bizarre!

What would you be doing if you weren't doing this?
I would still be doing something in the entertainment world but would probably be managing a band or a club.  I love to introduce people to music and artists that they may never have heard of and preferably do that while sipping a great glass of wine.